We have a new web site!

Boys and girls please note that we have a new page. From now on we will post all stuff there.
CHECK A NEW SITE HERE! 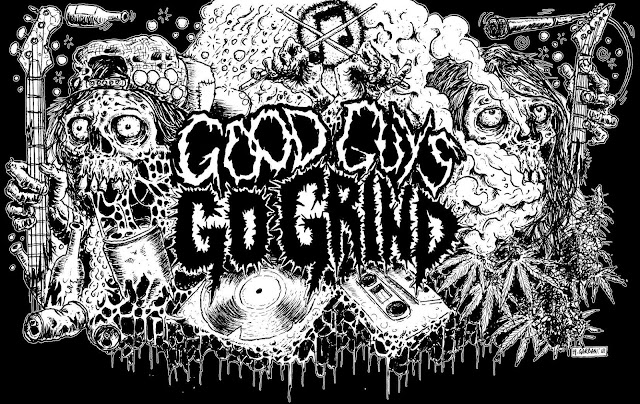 Split Expurgo/Nuclear Holocaust is out! 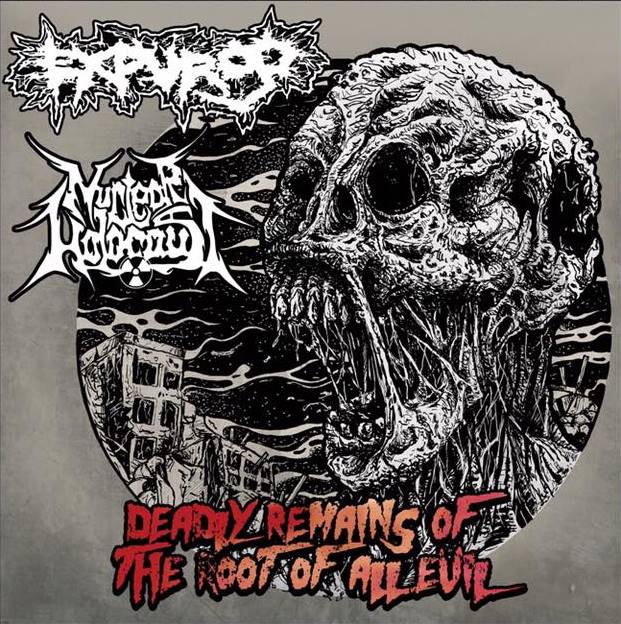 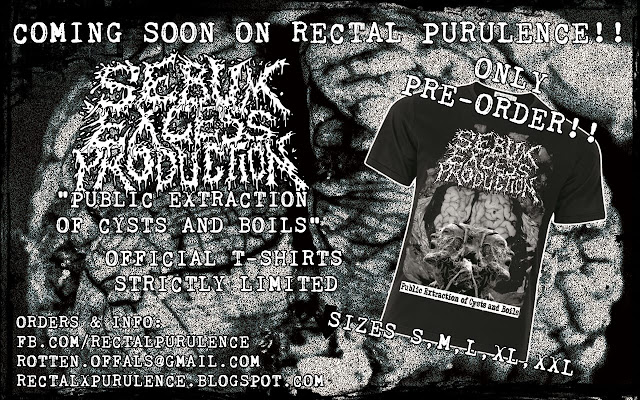 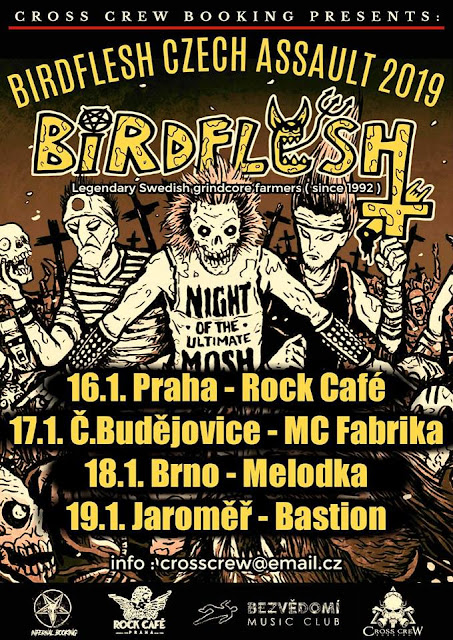 You can order this stuff HERE! 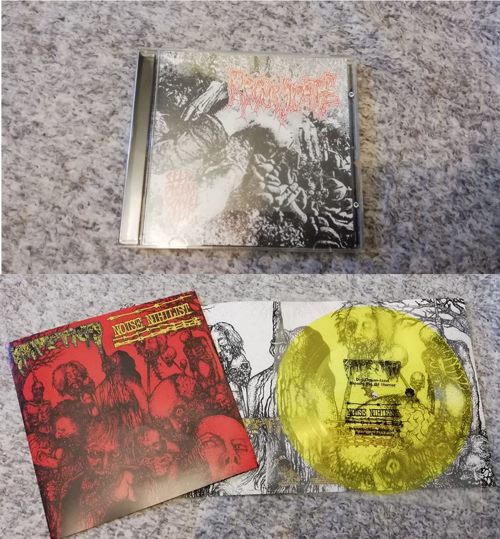 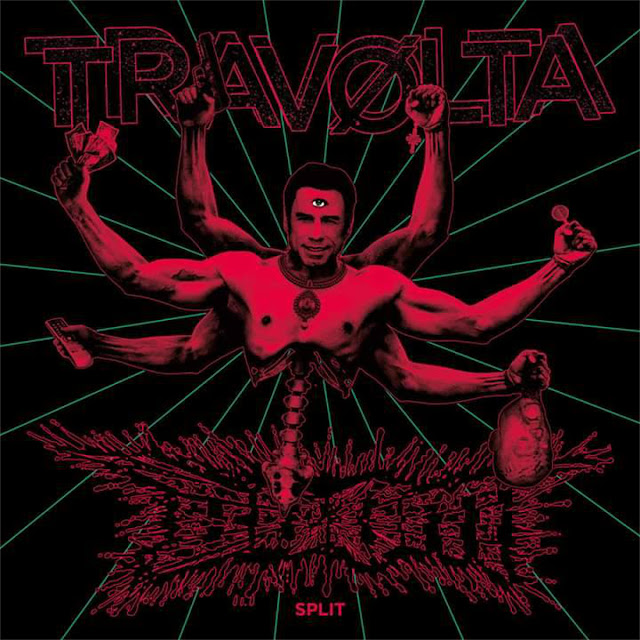 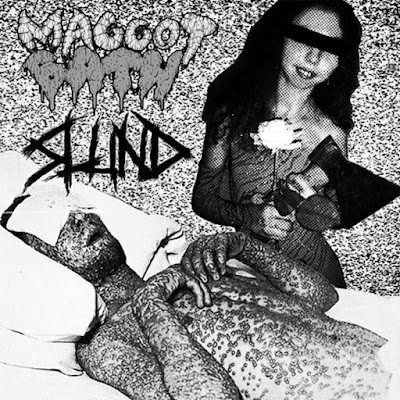 What is common in Australia and Slovenia? You should listen this release to understand it. Here is a split CD with two cute bands from opposite sides of our planet. When I first saw this stuff on the internet I was confused because of the cover art - the whole design is an ode to deadly form of smallpox. All of the images are really creepy, and it's hard to believe how painful and discomforting this illness is. So I expected to hear some gore tunes, but I was mistaken. Both squads are playing grindcore, but not a classic one; Slund and Maggot Bath love to make some experiments with their music. Slovenian band Slund is the first who'll begin their grind experiment on our minds. The guy behind this band really love to mix primitive grind structure with other genres. So you should listen this noise much closer to dig it. Fast grindcore mutates into weird sludgecore and then to grindcore again. Also there is some elements from metal and hardcore (especially tiny beat down pieces). A stange observation; vocals are not the main thing, as loud guitar sound and drum-machine are the main gods in this mess. Slund shows us an unusual side of the grind, and you should chose to like it or to throw it to the trash - but personally I like these tunes. Maggot Bath is creepy (in good way) toxic grind from Melbourne… It's hard to describe their music and I have a feeling that they just take stoner, doom, grindcore, hardcore, metal, and Satan's balls and whipped in a blender, haha! I know that sounds crazy, but all together these elements sound great. There are slow and fast moments, and this music is full of weird dark atmosphere and sound slime. All songs have a nice sound, it not super juicy but pleasant, same with guitar tone and drums. This is strange and unusual grind, but it worth of your time guys. Rating: 7.5/10 Slund fb Maggot Bath fb
Posted by Alex Grind at 8:23 AM

Out now at Grindfather prod! 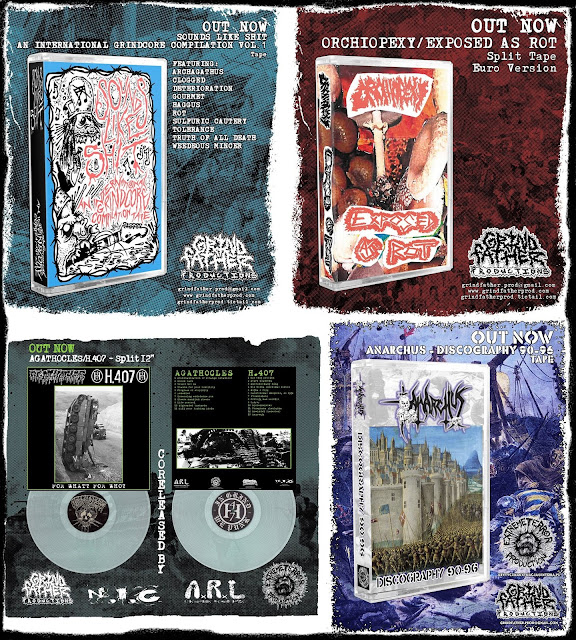 Shoot your order to: klieveage@gmail.com 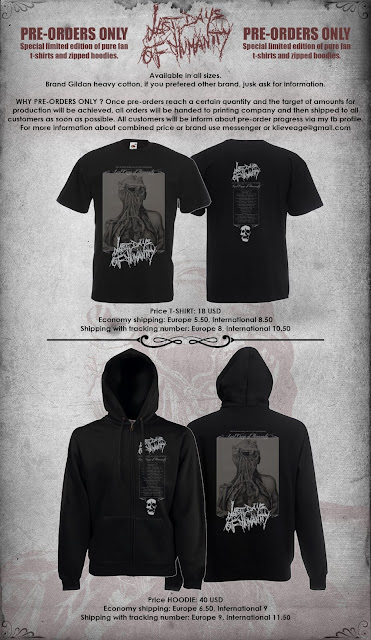 You can check this split HERE! 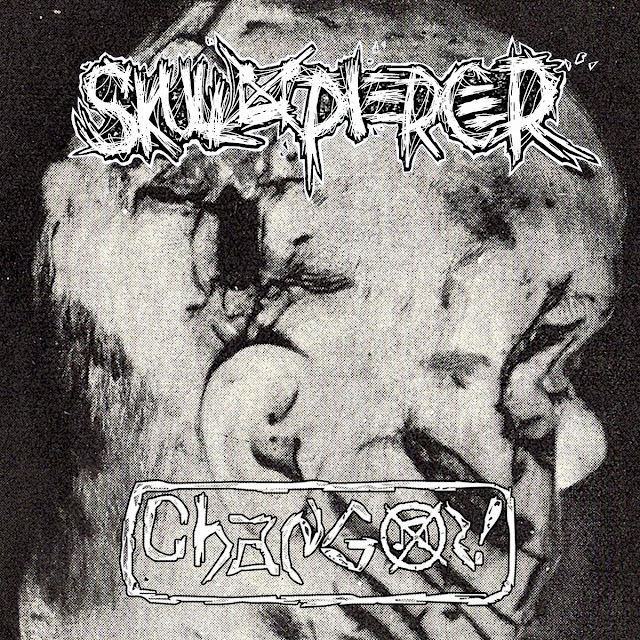 For more info visit oficial page of HereAndNowRecords in facebook 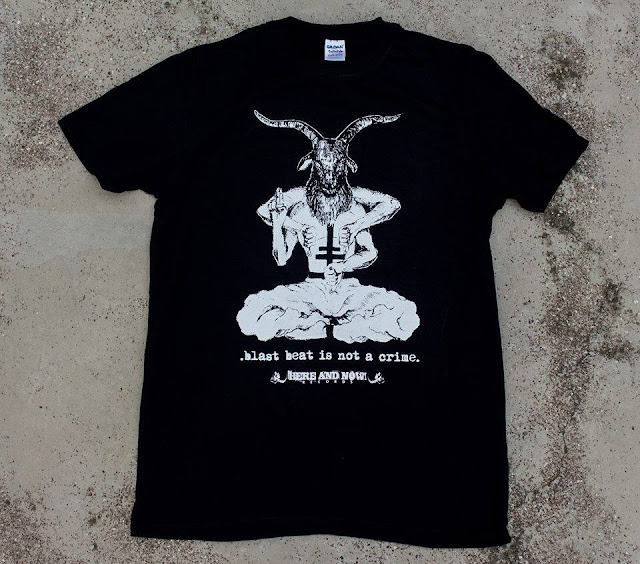 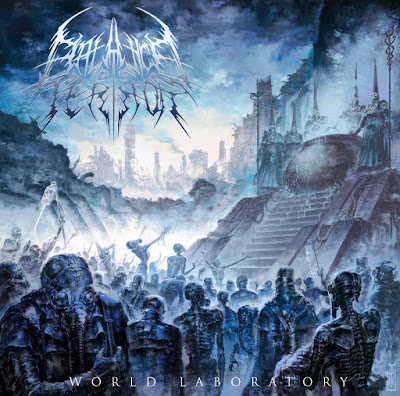 Today's offering is the debut record from Balance of Terror - This release is 8 tracks of brutal death metal from the north of France, put out by Ghastly Music.
This came to me packaged up in a professionally done CD - admittedly, it's been a long time since I've actually opened a new CD (I’ve been spoiled by records and cassettes), but this has the look and feel of a very well put together release. Sadly, the global postal system STILL hasn’t figured out how to not break things… Anyway. I really like the art - to me, it seems like it’s a bit more appropriate for a black metal release, but I think that’s probably because of the cold colors that were used; it makes it feel winter-y to me, and my mind automatically goes to black metal. But, the art is very well done, and it does suit this release quite well.

How does it sound? Let’s find out. We open up with an intro that just kicks you right in the face with a slow death metal build up. It’s here that we get to hear the tone of everything before we break into the madness. First of all - this is a REALLY well produced release. The guitars are clear and present, the drums are tight and punchy, the vocals are brutal and right up front, and the bass brings that low end, springy feel to it. After the intro, we break right into a hyper speed blast beat and a nasty technical riff - yup, this is definitely death metal. The mix here stays consistent, and it’s really a pleasure to listen to a well mixed release every once in a while. Past the actual sound of it - how are the songs? Well, for one, they’re long. Most tracks are in the 4 to 5 minute range, and as a grindcore reviewer, this feels like an eternity. There are a LOT of really well put together riffs and transitions here, but for my tastes, I wish they cut out a lot of the filler and just kept the brutal parts. The blasting parts definitely have a grind feel, but after the first few tracks, it’s gotten pretty stale waiting for those parts.

I just want to make it clear here - if you’re a brutal death metal fan, this is a really solid release. It sounds great, and it’s good death metal. But, for my grindcore based tastes, I can really only enjoy a track or two from this release before I get bored. Listening through the whole thing kind of felt like a chore, if we’re being honest, though I started off being really into it. 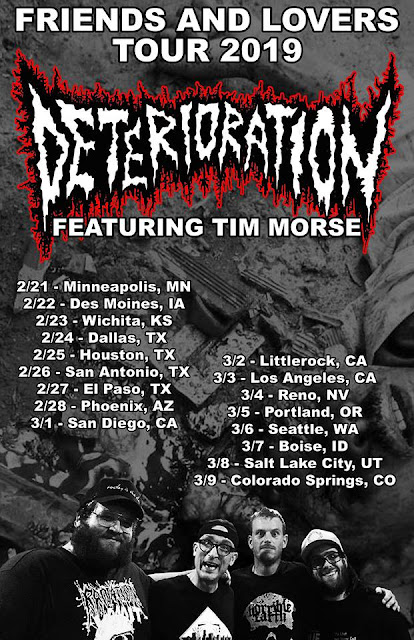 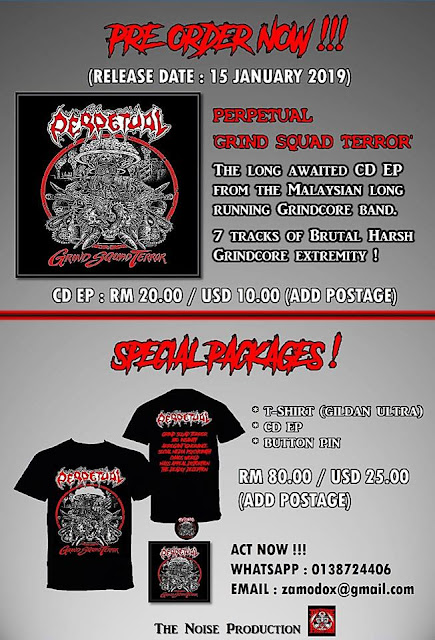 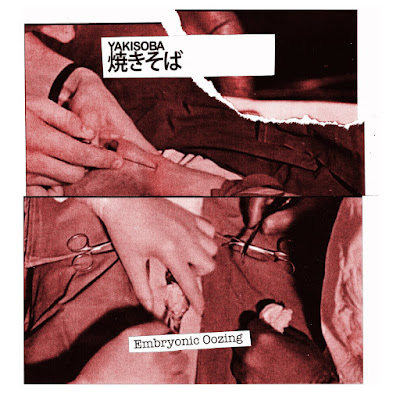 This spring, gore blast from Italy released its second work. This work is full of maggots and purulent stench, and the guys from Rectal Purulence Recs noticed that, liked it, and released it. This CDr release looks pretty primitive, but sick. There are just a few photos of surgery and a image of helminths for the back cover. Nothing much as for gore theme, but we have what we have. Regardless, I can assure you that the music inside sounds much uglier and brutal that this cover picture looks.

Embryonic Oozing is 7 minutes of gorenoise that will make you puke. 7 songs that regular metalheads can`t handle, haha! The vocals are sickeningly brutal, these pitch shifted roars are the main things here. The guitars sounds dirty and messy, it cluttered by drum-machine and vocal. By the way, digital blast beats sounds good, their sound is not super annoying. The whole material is a bit better than debut demo, so step by step this project is growing up. Like other gore bands, this rotten unit is using different sound pieces from the movies. But Yakisoba didn`t use a regular samples from old horror films, this band is using fragments from Japanese movies, and that works perfectly with this unholy noise. As for the sound…  there is a lot work to do, it's still too raw.
I can recommend this small release to real gore fans, who are not looking for Relapse rec sound and bands with big names, because this CDr contains only poor vomiting aggression.


Rating: 7/10 Yakisoba fb Yakisoba bc Remember guys,keep the underground music scene strong by supporting the artist/band/labels.
Posted by Alex Grind at 11:01 AM 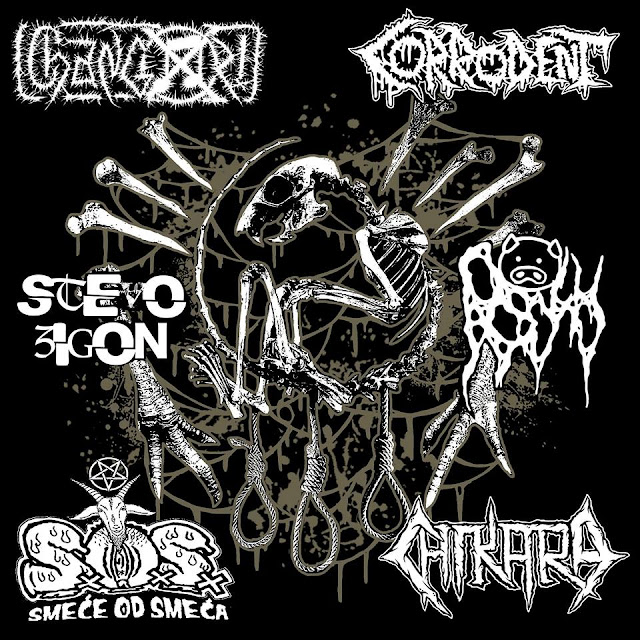 You can order this CD at Left Hand Patches! 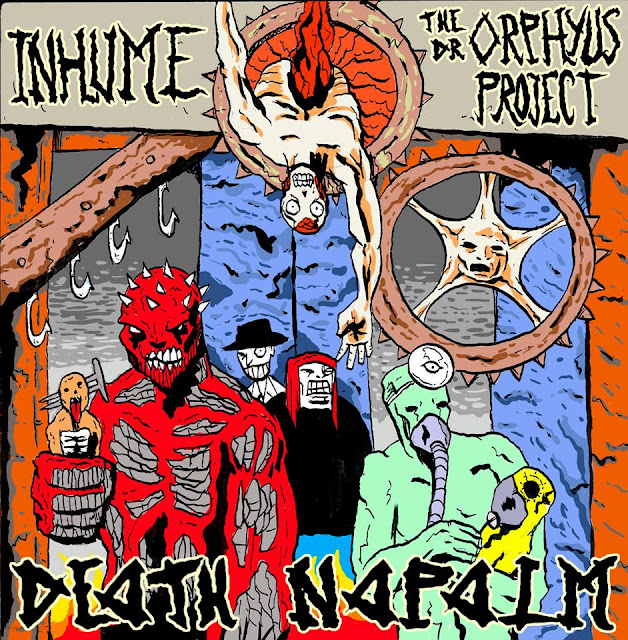 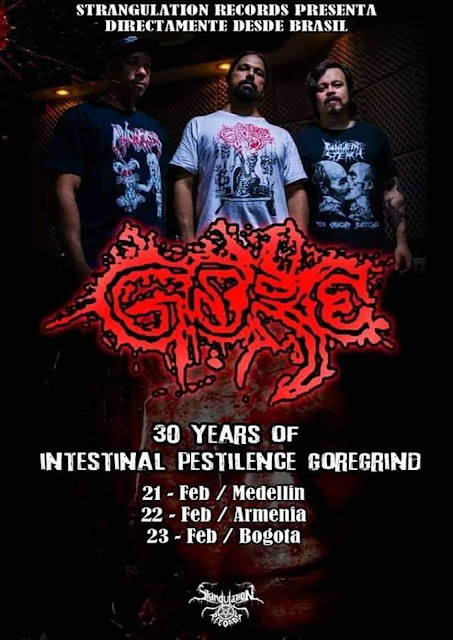 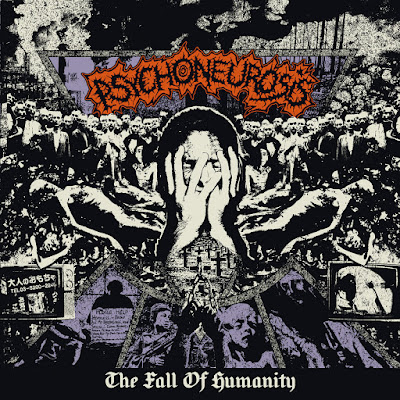 Only a lazy fan of extreme music hasn't heard that Psychoneurosis is back. After doing a successful split with AG and a bunch of cool gigs, these guys finally recorded a new album - this news cheers me up. Then, Selfmadegod Rec posted a preview song “Brexshit”... fuck...that was a brain-crashing song. So I started to wait for the whole album, and a few month later “The Fall Of Humanity” was in my hands… I guess Psychoneurosis tried to prepare/warn listeners about unexpected fast and ugly grind fights, that why they started with and elegant, atmospheric, and slow intro. I must say, that was a great idea because “Modern Technology” (the next song) is damn harsh. Death-grind riffs collide with bloody good blast/polka beats to create some of the most efficient grindcore warfare of this shitty year. I love this brand, heavy sound with a bit metal taste, that sound is like an indicator… When I hearing it I know that I`m listening a band from Poland, hehe! Anyway this balls to the wall material has a ton of great songs with cool guitar sound, blasting drumming, and savage vocals. Psychoneurosis managed to create a really badass grind product. Everything above is hidden in a well produced CD with badass cover art. Just look at this image, this crossover of “From Enslavement To Obliteration” looks gorgeous! Maybe this is a joke image, but fuck, the artist did a massive work with all elements, colors and other stuff. I freaking love this art and noise too! Rating: 8.5/10 Psychoneurosis fb Psychoneurosis bc

Remember guys,keep the underground music scene strong by supporting the artist/band/labels. Get your physical copy HERE!
Posted by Alex Grind at 10:42 AM

"We Need More Hardcore" is out! This dirty LP released by Loner Cult Records and I Feel Good Records! 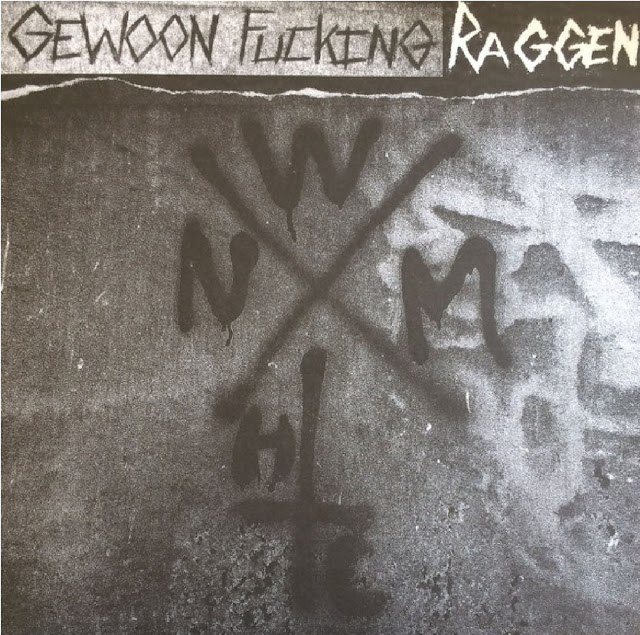 Split G.B.S. / Sebum Excess Production will be out soon at Terrible Mutilation Distro! 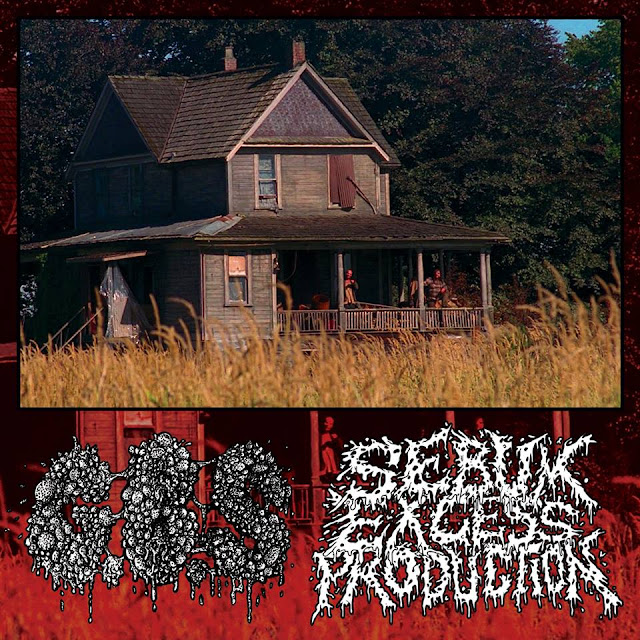 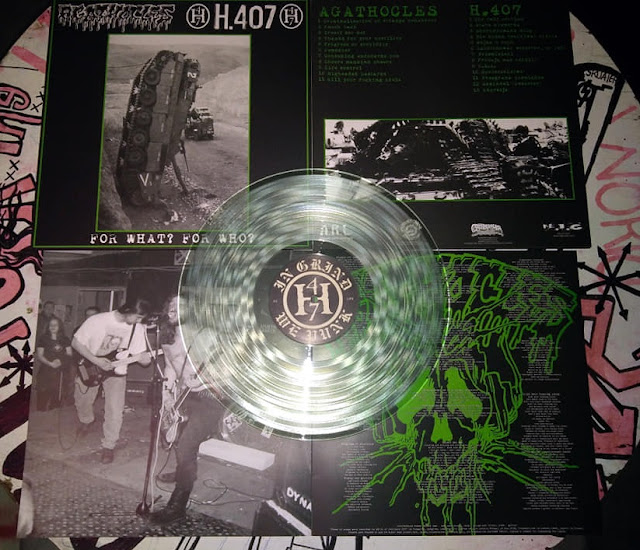 Perpetual is going to destroy Malaysia and Singapore! 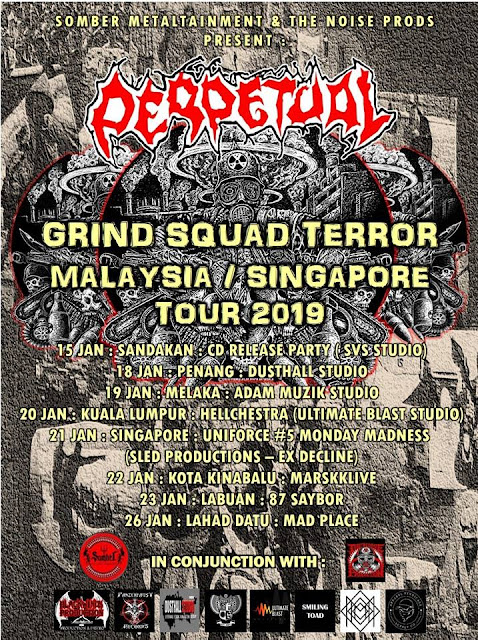 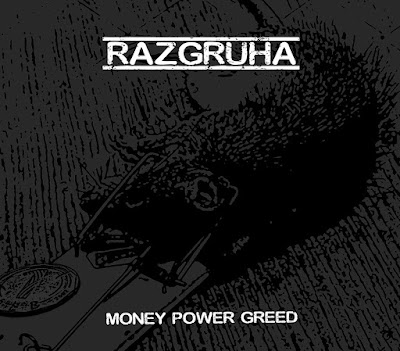 I don`t know why but, the Grind scene in Bulgaria is very poor. There are just a small bunch of extreme squads and Razgruha is one of them. This band is not so new, they began their escapades in 2011 in Sofia (Bulgaria). 2017 was a big year for these boys, they finally release their debut album “Money Power Greed”. As far as I know Razgruha made everything on their own, I mean recording, mixing and even releasing… I must say that is true DIY spirit and I appreciate it. As for the music... These guys used all the attributes of Grindcore. Harsh social commentary lyrics, short riffs, fast blasts, etc. But this album didn't touch me, I honestly tried to dig it, but I failed. The sound is sloppy and weak, and has an overall metal sound more so than a Punk/Grind one. Most of the songs were created with good middle tempos, it`s ok for Grindcore, but I can't feel the energy in these songs. Almost all songs are literary lifeless and dry… In general there is nothing new, all the riffs and structures are old and well known. That is not necessarily a bad thing, because many bands build their Noise around that moldy formula. I guess Razgruha worked hard on this album, but the results are frustrating. I`m sure that in live action this band rips, they just had bad luck with this recording and that is it… Rating: 5.5 Razgruha bc Razgruha fb
Posted by Alex Grind at 3:31 AM 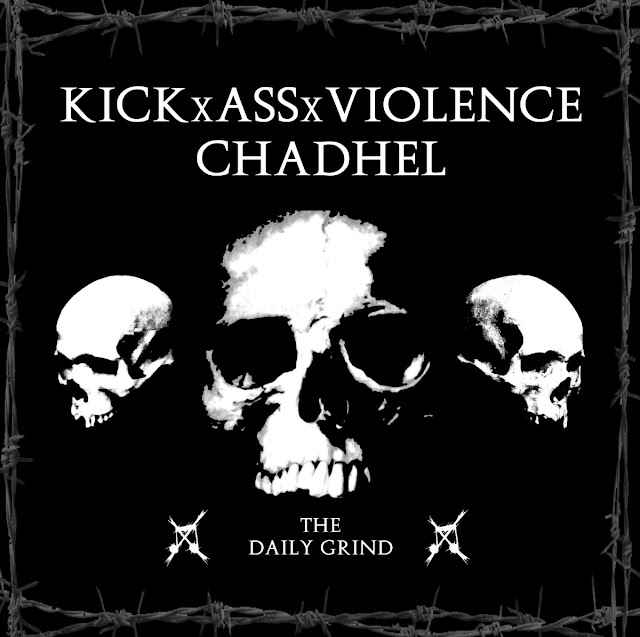