Obscene Extreme is one of the most Grindcore places on our small planet. I had always wanted to visit it, but for a number of reasons I managed to finally attend this year. On a high note, it’s even better because I visited during the big 20th anniversary celebration of the festival. So here is my story about a trip to the town of Trutnov. 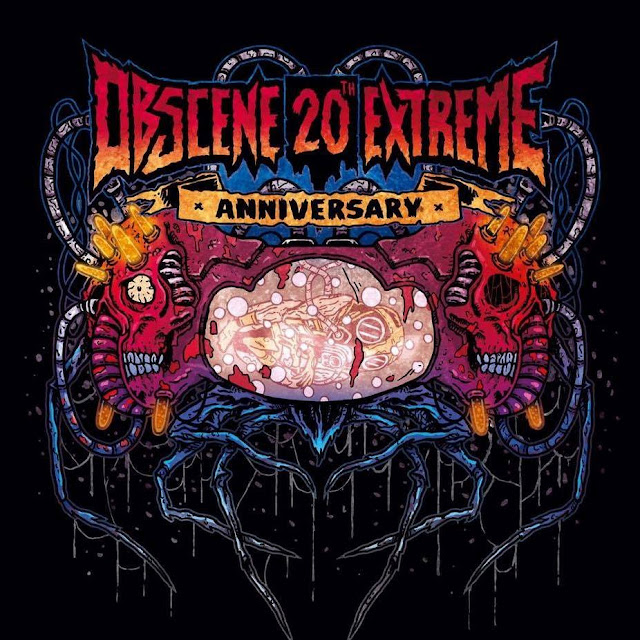 It was a long and hard journey; we left Kiev by car and did about 700 km of driving when we got stuck at the Ukrainian/Polish border for about 5 hours. Only in the morning did we manage to enter Poland. That country met us with dark clouds and gloomy fog; but anyway I liked the view. About 700 km more (through the nice autobahn and through powerful rain) when we reached the mountains littered with a few beautiful small towns. The view of mighty forests, yellow fields and small old houses just conquered my heart. These lovely pictures are still swarming in my brain. Just a moment more and we were in Trutnov, finally we were there! 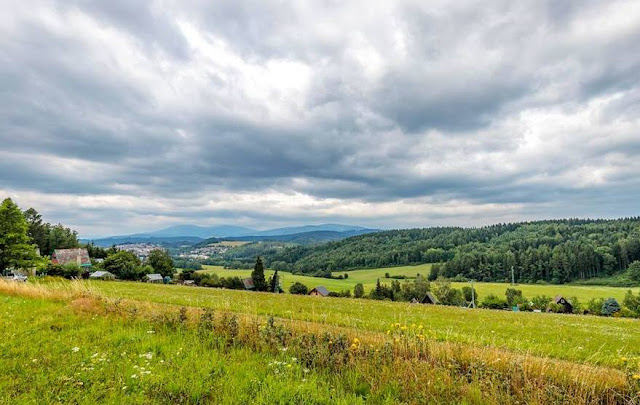 My first look at festival area and camping place surprised me, there is so much nature with hills, trees and hundreds of people and the air was so fresh. Of course that was the beginning of the festival so boys and girls were celebrating, loud yelling, drinking and smoking. People were everywhere. 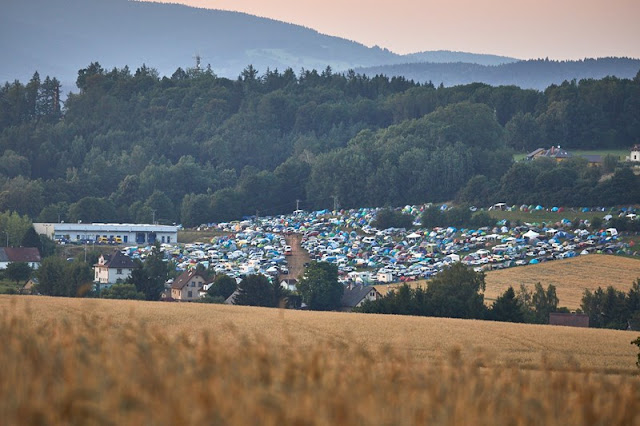 We drove about 1500 km without sleep and that night was our first real stop, finally we got some rest!

The first day was the hardest one. After a short breakfast I put myself together and went to the backstage gates, where I got my pass.
It was hard to believe how long the line at the cash desk had become. There were so many people and everyone wanted only one thing, to get into the festival area. 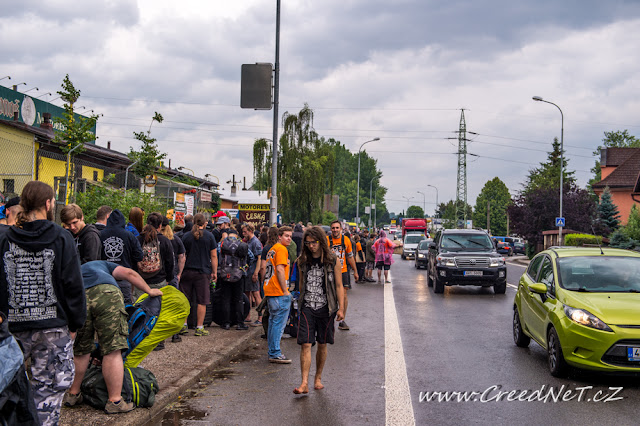 It’s worth mentioning that everything inside was well organized. Want some food - here you go! Need to poop? - No problem at all, there was a lot of bio toilets in every corner of festival. But for me the main thing was a shower. That is necessary part of our life, especially when you’ve come back from the mosh pit, hehe. 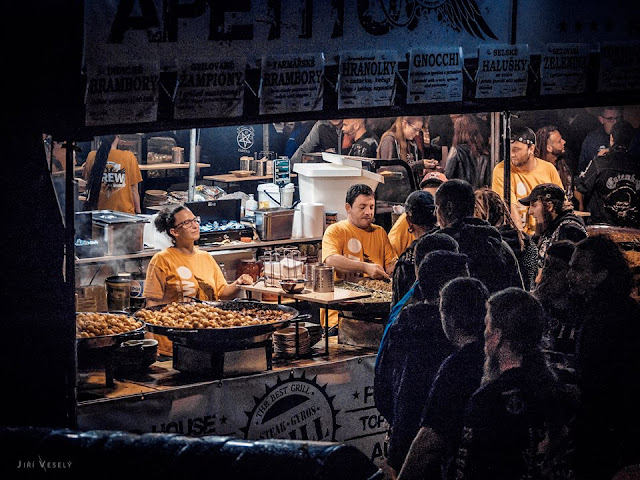 The Noise started at 13:00 with Brainwash (I thought that they were not active, because I had not heard about them in a while). I must say, they gave a good first kick to fans asses. I was happy to see Onanizer live, they were powerful and full of energy.
Should I say that every band in every day was good? Even if it was not my type of music, every damn band gave their last on the stage. 18th of July fills my memory with crushing Needful Things, bloody good Malignant Tumour, blasting Entrails Massacre, savage Abortion, awesome performances from Agathocles and massive sound from Squash Bowels. 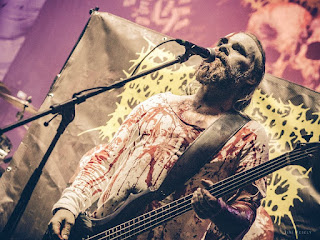 I also got the chance to meet all guys from Nasum, they all were there and watching the documentary Slave to the Grind. 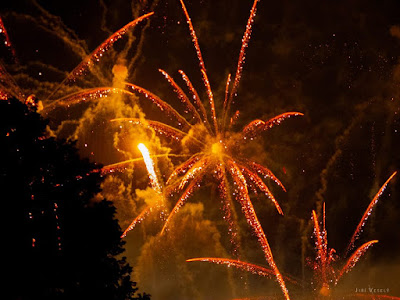 This day had a special ending. there were huge fireworks and the OEF’s crew prepared a “20 anniversary” stand/structure which was burned in the end. That was freaking amazing and that is definitely hard to forget.


The second day was absolute hell, the line up was awesome but the weather was too hot. It was hard but I managed to catch first band which played at 10:00 AM. Convulsions charged me with a good load of energy from the very beginning. 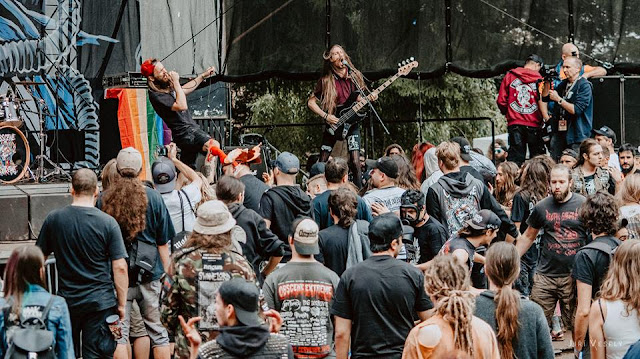 My old friends from Australia were next. PowerXChuck were really dynamic and fast, people started to mosh, the true fun was just begining. Unfortunately they had a short set and that was pity. Next in my list (yep I had a handwritten list with all bands that I absolutely had to see) was Chepang. This was my first time seeing them live with two drummers, guys that was so loud, haha! Gruesome Stuff Relish plunged me into the atmosphere of old horror movies and books. I thank them for that, it was memorable portion of old good Grind. 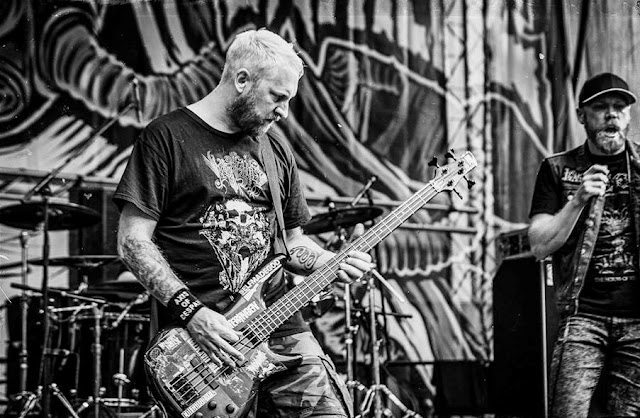 17:45 and Axis of Despair is on the stage. These guys do not mess around, their grindcore is so punching. The live performance sounds even more aggressive than their recorded stuff. Then, the next band was Gruesome. That Death Metal machine nailed me down, sound, riffs, everything was tight. I never liked Gutalax, but during their set people went crazy. Half of people were moshing, half were trying jump from the stage. That was so unusual for me, so many people were overloaded with happiness. The last band for me that day was Exhumed I can't say that I enjoyed their set 100%, they`ve changed a lot in their style, but they were nice. Unfortunately I was tired and a bit drunk so I went to my tent. 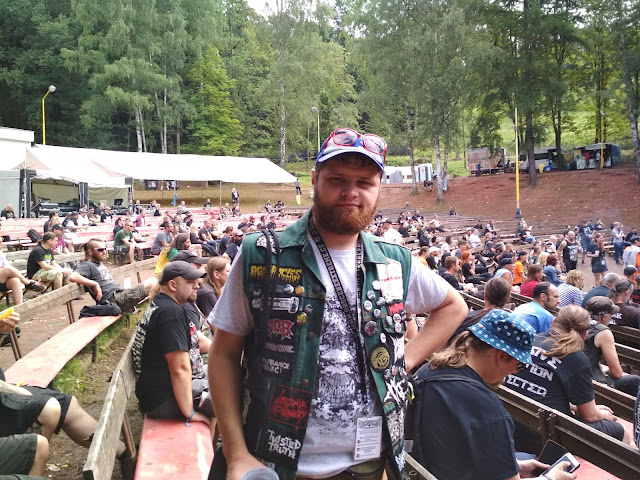 Day 3. 20th of July. Hangover morning, really hot sun but I know that this day will be pretty unique and rad. Since I’m going by my list I should be near the stage at 11:30. So I spend this time at the market area. There was so much stuff and so many labels. It’s so nice to hang around with R.S.R., Power It Up, Selfmadegod, DeadHeroes and FatAss Records. Obviously  I bought tons of everything, haha! My cell phone screamed to remind me about Meth Leppard. 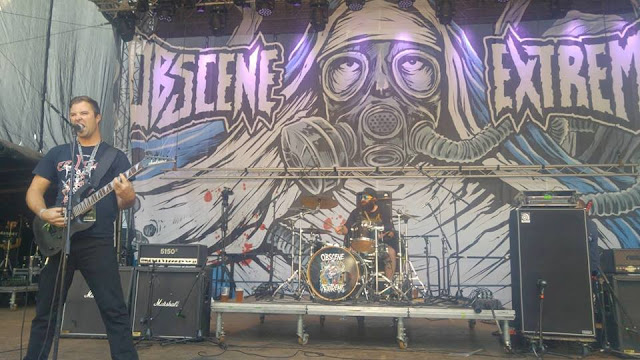 That duo crushed my hangover morning. So much fun smashing riffs and energy. Next was Organ Dealer from USA, Expurgo from Brazil, Oxidized Razor from Mexico, Nashgul from Spain, Inhumate from France, and of course Flagitious Idiosyncrasy in the Dilapidation from Japan. All of them were fantastic it’s hard to find words how happy I was to meet all of these nice people. A few cold beers and I was ready to check Rectal Smegma, Cripple Bastards, Rotten Sound, Napalm Death and Wormrot. Each band gave off so much energy I was really surprised about that. My day ended with Le Scrawl. This is what I had waited for so long, I thought that this German band was split up, but I was wrong. They are so magical and weird, seeing them live was like a New Years gift for me, haha!


I got an excellent life lesson that day... It's very hard to check out every band that you like and talk with all people there. Sometimes you could be able to listen only a few songs, sometimes you could check the whole set. And you should be full of energy or otherwise you will be dead by the middle of the day. 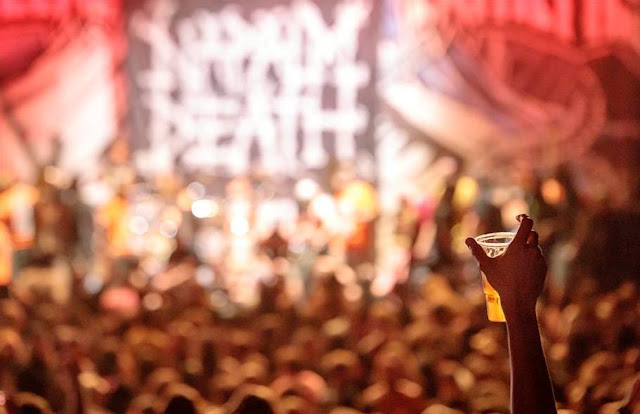 The last day of the festival. It’s quite sad to realize that the fun is almost over, and I need go back to my daily life and work. I slept until 10:00 AM. So I missed “Slave to the Grind” (sorry about that Doug). My music day was started with melodic crust from Mexican amigos Bio Crisis. Then was Thanatology, the guys in red kicked auditory ass with tasty and catchy Gore tunes. My homies from BruceXCampbell were next. A squad with only 3 guys, but they managed to blow the stage apart. 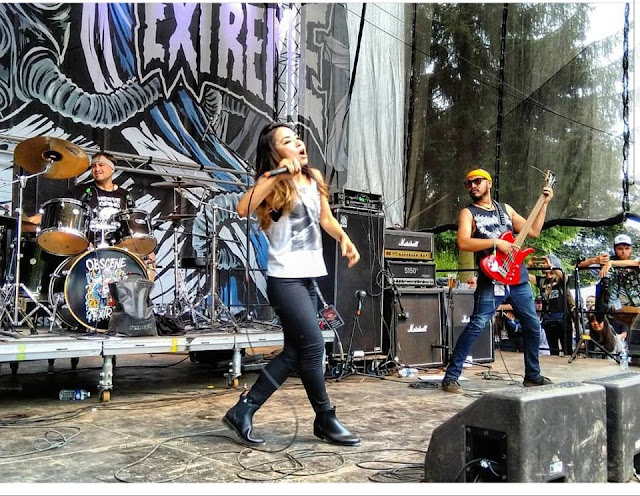 The Unholy Grave cover with Makiko on guest vocals was especially good. Japanese act Self Deconstruction smashed fans with their twisting Grindcore. I bet that everyone remembers the bright dress Kuzuha was wearing. Swedish Grind Legends Birdflesh were just fantastic! I had so much fun, that performance helped me to charge my batteries again. Butcher ABC showed some kind of Gore bushido to the European people. I must admit, they were unstoppable. Punks Rattus brought an old atmosphere of underground to the party, I had a feeling that I was in some small rusty squatters pad somewhere outside OEF. Haemorrhage just killed me. Pure Gore masters what else can I say? 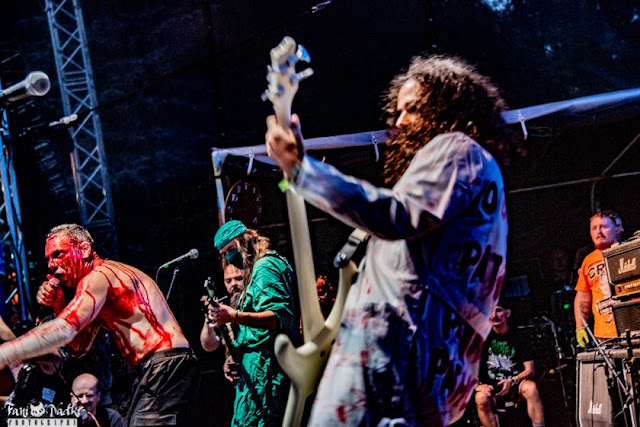 Grave decimated that night with their brand of Death Metal, I’m not a big fan of Swedish Death Metal but this band was epic. And finally my last band at this party was General Surgery. Ancient, bloody and very massive sound work on the stage. The visual side of everything was next level. 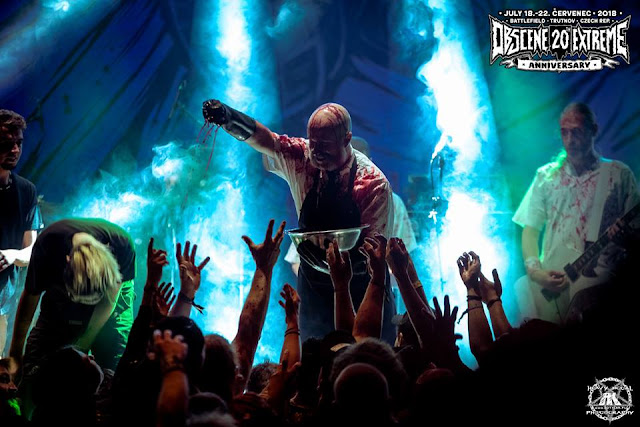 That how crazy my first OEF turned out to be.
Here is some interesting info for you all. I caught one familiar bearded guy from Sweden. He told me that his team Wheelmust Production is filming this festival. They did about 22 interviews and shot a lot of stage material. They will use this material for a documentary, unfortunately I don't know when everything will be ready, but I’m already waiting for that one.

I want to thank all the bands and all of my friends which I met there. It was huge pleasure to share a beer with you guys! And, of course, I want say thank you to all organizations and to OEF crew, your are legends! 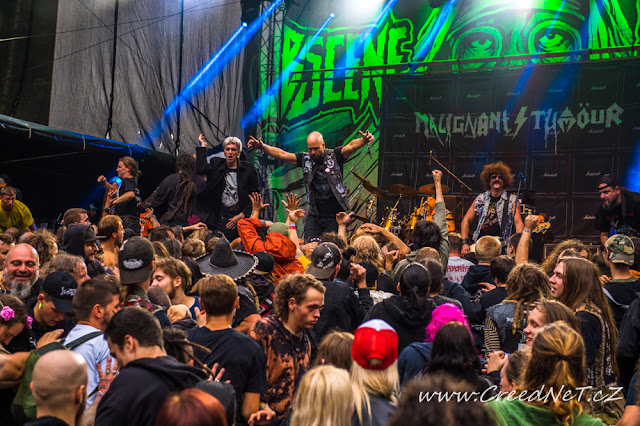