It's almost OK. The bad thing for me is, that in east germany we mostly have 5-7° less, than in my old hometown, where the others of Blood lives.

You started at 86. Ever thought that your band will be famous and admired in the world's underground scene?

Not really. As we started, we didn't know, how to play an instrument. We loved Death and Thrash Metal and tried to do something at home just for fun.
This grew up over the years and it is a real satisfaction, if people tells me, that they like our music... that made us marching on!

I should note, immodestly, that "Blood" gave a lot to many bands to start with. What can you advice to young bands, looking back to your experience?

I think today it is much heavier to get attention, if you start. Today all borders are overridden... the fastest, the loudest, the heaviest... whatever. You as a band need to have your own style, your own special outfit, or something others, the people could remember to get the attention. It's not always most neccessary if you are the best musicians, but have no feeling and are not in your music with heart and soul. Don't play a style that you are not into.


Tell us something about your everyday life. Job, family, hobbies, etc. It's always interesting to know what do you do besides playing in band, i think, this also affects the music.

Since I moved to Berlin (700 km away from the other guys), it became heavy to continue the band.
Now we still listen to lots of musics, but mostly old bands. We all have our jobs and families: Taki and Clausi works in big chemical company called BASF, Hanzi working in a wharf, Vantilator is a paint master and I'm a postman. Nearly all of us have childs or are married and have lots of hobbies. I play and create board games, watch movies in cinema, love to eat in a restaurant... 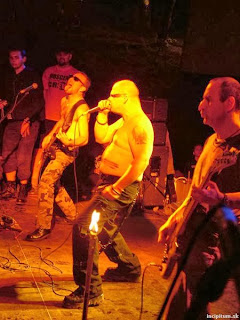 What's keeping the band alive all these years? What has changed in the band and your views from the beginning 'til nowadays?

We had good and bad times. Mostly we had a stable line up with Ventilator, Taki and me. We changed the singer several times and were nearly broken, after Martin "Chicken" left us the second time back in 1993. But we found Clausi and came back stronger than ever. Since I moved to Berlin back in 2005 things became much more difficult, especially write new songs. (Ventilator and I wrote most new songs that time!). After a while we found Hanzi as a second guitar Player, so the guys still could rehearse without me. And we try to play as many shows as possible. Too bad there are only 2-5 a year, but with our Jobs, hobbies and family it's not easy to get all 5 people together.

What were you listening to lately? How do you relax, aside from music? Movies, books, alcohol?

I personally listen a lot to "ordinary" Rock Music. I like Disco Ensemble, Korn, Placebo, Royal Republic and other stuff like that, but I also love the latest Morbid Angel and Carcass. As I mentioned before, I love cinema - my wife and me have a card where we could enter cinema as often as we want, only have to pay once a month, so we have the chance to see lots of stuff, mostly underground Arthouse movies, but mainstream is not my stream :-)

If you could go to see some band live (oldschool or not, doesn't matter), what band would it be?

I thnk, I'd love to see and meet Impetigo personally. They grew up with us (and Agathocles) and we had a really close friendship during many years whith letters, tape trading, photos... 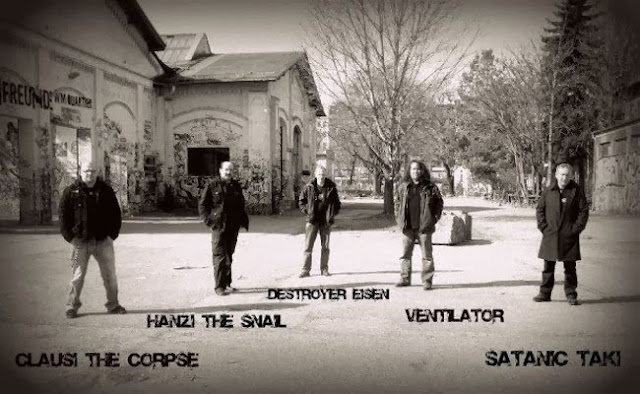 Is it right to suggest that you are a completely gig-band now? Or there is hope to hear your brand new LP/split?

Yes, almost. We hope that we could release something one day and I know, that people would like to hear something new, but we only have a very few songs/riffs ready.

Your 7-inches were never re-released. Is this a band's policy?

We made them by ourselves and were happy, if they were all gone. We are a bit proud, that many people are looking for them now. In the present we don't have the time and the contacts to manage this again.
Besides this, we still have some "Massacre" and Split 7" with Inhume left! Now I think it's fair to the people that bought our stuff originally, not to re-release everything.

Is it fair to judge the human for his creations? 'cause a lot of musicians, performing extreme music, are great people, not crazy as fuck butchers, as other people used to imagine them.

No! we are also "normal" people in life. We love morbid lyrics, crazy stories... in songs and in movies. You cannot go out and slaughter others and stuff. That's not how life goes. 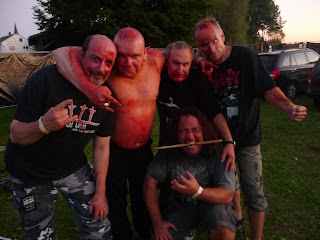 What moments in band history were the most significant and why?

I think back in 1994 as we found Clausi as singer. we were nearly at our end, as we met him at a show and let him wisit a Blood rehearsal. He learned many of our songs and had a phantastic growl. After that we progressed a lot, especially with
Depraved Goddess and Gas flames bones...

Blood performed in many cities and countries. Is there some traditional cultural program - sightseeing, buying a souvenirs, degustation of a local beer?

We like to visit many countries and we love to meet the people from there with all their special things of their country. We mostly try to be at our target-city one day before to do a bit sightseeing and we also
try to taste some local beers for sure. But also very often we haven't seen anything of the city - arrival in the dark, playing the show and leaving the next early morning... that's lots of stress and not what we really like.

If you wouldn't be a musician, where'd you find your place in life? Maybe in other form of art or technology?

I personally try to do something creative. Besides my music, I'm a boardgame designer. So I created something besides the music to remember. That's what I love and live for!
It' the same phantastic feeling as releasing a CD with your picture and name in, having a board-game with your name on the game-box. 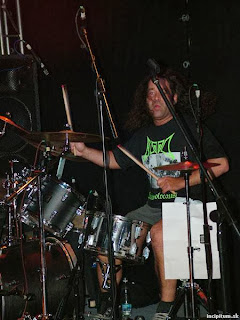 Tell us about your attitude to religion. 'Cause today it brings more evil than good.

He he - sure I love the dark side of life with their symbols. I don't know totally whot to do with a god and how people could pray to something that never exists. I'm a real Atheist and don't believe in a higher might.

As i recall, Blood has never made gigs in post-soviet countries. What it takes for you to come here? Any rider?

In the past there were some plans to visit russia for a few shows, but if a date came nearer and nearer all plans werde destroyed. Such a minitour is not very easy to organize and also not very cheap. We cannot manage this alone and need a good organizer, that helps us with some shows and also came from A to B!

Eisen, as an old school man, tell us what do you think about popularization of digital media?

I really don't understand how can you enjoy the album fully without keeping it in your hands,
watching over cover and and so on. Things have changed during the years. In the past there were only a very few bands with a very few releases. It was something special to have an vinyl LP along with a lyric sheet. You listened to the same things over and over and after a while you remember the lyrics. That was a great time. Now so many interesting things are released over and over and you have no time to listen everything with such a devotion. You don't have as much time to listen music and there is too many stuff. People don't wanna pay for all the stuff and so I know many who download music legally or illegally. I also did this in the newer past - that's the way things have changed. I personally prefer the old times, but I see that they'll never come back. 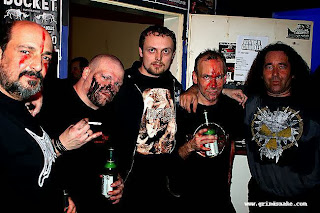 Thank you for the interview! Say a few kind words in the end...

Thanks a lot for your interest and thanks to all who still love and remember Blood... that keeps us staying alive!