Axis of Despair - Contempt for Man 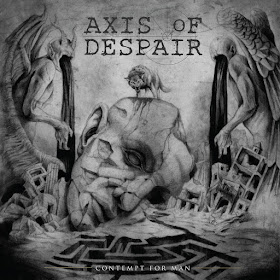 Well today is the day! Swedish grinders Axis of Despair have finally released their first full length album! Hip-hip hooray! This work sounds much stronger than the previous 2 EPs. This album is the real deal; half an hour of insane Grindcore in the relentless Swedish style. These guys managed to make this album deep in so many ways, strong lyrics about human behavior, social queues and the blackest shit in our souls. The awesome artwork (drawn by Paul Romano) has many key features; including a dark atmosphere and cold undertone. Then of course there is the music. All the songs were not written by a single individual. Each song is intricately written by one of the band members, so in the end we have something along the lines of a compilation of each members greatest traits shining through. Despite that fact that these guys are all different people with different views, all the songs sound like they flow in one smooth line.

Contempt for Man is the complete package: twenty songs of pure brutality and anger. One of the things on this album that I love most, is it`s a great balance between instrumental parts and vocals. Joel did a great job; he screams exactly as much as these songs need, he does not clutter everything with roars, and that is necessary. Anders drum work is amazing, the reverberation of the cymbals and the stuttering blasts just get inside me and I lose all sense of time and place. Oskar managed to catch a really nice and low tone. The grizzly sound of his bass guitar brings some dense notes into the whole song structure. Fast riffing from Kristofer could smash your skull. The buzzing tunes from his instrument literally drilled my ears, ha!
As you may know this band features members of Nasum. But, believe me Axis of Despair sounds nothing like Nasum. They have their own view of Grindcore and they don’t intend to change. So if you like fast blasting Grindcore with a great concept, go and listen to this album!